Pigs require energy to maintain normal body processes, grow, and reproduce. Feeds supplying energy are major components of all swine diets, and the quantity of diet voluntarily consumed by pigs is related to its energy content. Carbohydrates from cereal grains are the most abundant energy source in swine diets. Fats and oils contain more energy than carbohydrates per unit weight but are included in the diet to a lesser extent. Amino acids, or protein, may serve as an energy source if included in the diets in excess of the requirement for protein synthesis.

The value of a feedstuff is based on several factors: palatability (how well an animal will consume the material), availability of energy and its contribution of other nutrients (protein or amino acids, vitamins, and minerals). Selection of ingredients depends on the cost of the ingredient and its value as a source of energy and other nutrients for the pig.

To make sound decisions when selecting feed ingredients, it is desirable to have an understanding of the system by which feedstuffs are rated for energy content and the use of these ratings toward meeting the energy requirements of the pig for growth or reproduction. The gross energy (GE) of a feed ingredient is defined as the heat produced when a substance is burned. It is expressed as calories per unit weight. A calorie is the amount of heat required to raise the temperature of one gram of water from 14.5 to 15.5°C. A kilocalorie (kcal) is 1,000 calories, and a megacalorie (Mcal) is a million calories.

Not all of the feed consumed is digested and absorbed. Some energy is lost in the fecal material (Figure 1). Thus, GE is a poor estimate of energy for the pig. The amount of energy remaining after subtracting the fecal energy loss from total energy intake is designated as apparent digestible energy (DE).

The difference between GE and DE may be large. The greater the digestibility of energy (DE/GE), the greater its value as a source of energy to the animal. DE is a more meaningful measure for livestock producers than GE.

Metabolized energy (ME) is the usable energy of a feed for the pig to live and grow and is obtained by subtracting the urinary energy loss from the DE. In most cases, metabolizable energy of complete swine diets is approximately 96% of the digestible energy content, so the conversion from DE to ME can be easily made.

Some energy is released as heat as a result of inefficiencies in the metabolism of nutrients. This is called the heat increment (HI). It is used only to keep the animal warm and heat increment produced beyond that needed to maintain body temperature is lost. The remaining energy, called net energy (NE), is used for maintenance (NEm) and production (NEp). Determination of NE values requires measurement of heat production or energy gain and an estimate of maintenance requirements. Special equipment is required for the determination of NE content of feed ingredients. Therefore, DE and ME are currently the most widely used measures to classify the energy content of feedstuffs.

Cereal Grains
The basic energy sources for swine are the cereal grains: corn, sorghum grain (milo), barley, wheat, oats, and their byproducts. Cereal grains are high in carbohydrates (starch), palatable, and highly digestible. Usually they contain less lysine and other amino acids, minerals, and vitamins than swine require. The diets therefore must be supplemented with other feeds to increase these nutrients to recommended levels.

Grain by-products have many characteristics of their original source but tend to be bulkier and have less metabolizable energy. Although their protein content is usually increased, the protein quality often is poor.

Corn contains less protein but more energy than the other cereals. Like all cereals, variety, growth conditions, method of harvesting, and storage influence the composition of corn. Because of its abundance and high energy digestibility, corn is used as the base grain for comparing the nutritive value of other cereal grains.

Sorghum grain is similar in quality to corn and can completely replace corn in swine diets. Its energy value is 92% to 94% of the value of corn except for some bird-resistant varieties which may be only 80% to 90% of the value of corn. Grinding is recommended because the grain is rather small and hard.

Barley contains more protein and fiber than corn. High quality barley has 105% to 113% of the nutrient value of corn, but it may be less palatable. Wheat is equal to corn in feeding value and is very palatable when it is medium to coarsely ground in complete diets. Wheat can completely replace corn in swine diets. Oats contain more lysine than corn, but its nutrient value in swine diets is only 90% of corn because of its higher fiber and lower energy content. 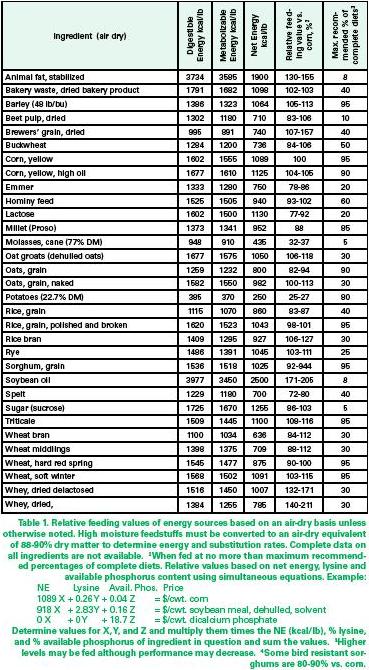 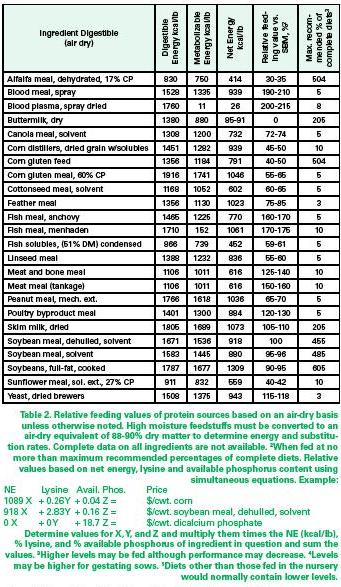 Fats and oils contain about 2.25 times more metabolizable energy per unit of weight compared to carbohydrates in cereal grains, but they are more expensive. Fats are available commercially in products such as choice white grease, bleachable fancy tallow, prime tallow, yellow grease, hydrogenated vegetable fat, corn oil, soybean oil and various dry fat products that combine fat a with a dry carrier. Fat sources should be protected from rancidity by an antioxidant. Vegetable oils are generally higher in DE and ME than animal fats. Furthermore, very young pigs do not utilize the harder animal fats as well as vegetable oils, but vegetable oils and the dry fat products tend to be more expensive than animal fats.

Supplemental fat is difficult to add to the diet using on-farm mixing facilities, especially in cold weather. Most fat is handled in a liquid form, often in a special tank requiring supplemental heat during colder weather to keep it in a liquid form. Feed containing added fat is somewhat sticky and tends to bridge in bulk bins and feeders, tends to “oil out” of paper bags, and reduces pellet hardness. These problems increase as the fat level increases and become severe when more than 6% added fat is included in the diet. Fat changes the physical characteristics of a swine feed, reduces dustiness, and improves the air quality in swine buildings.

Certain biological effects can also be expected when fat is added to diets of starting, growing, and finishing pigs. These include: improved palatability, reduced feed consumption and improved feed efficiency due to the increased energy density, a slight increase in growth rate, and increased carcass fatness at high fat levels. High levels of vegetable oils can cause a softening of carcass fat.

The response of the pig to fat may be more favorable in warm or hot environments than in cool environments. Fat has a lower heat increment than carbohydrates or proteins and is less likely to cause reduced energy intake during heat stress. When fat is added to a swine diet, the amount of feed consumed usually decreases. However, the requirement of the pig for other nutrients remains relatively constant when expressed on a daily basis. Therefore, to maintain performance when fat is added to the diet, the concentration of other nutrientsshould be increased.

The decision to add fat is largely based on economics. If the value of the improvement in growingfinishing feed conversion is greater than the cost of adding fat, it is economical to use. Typically, adding 1% fat to the diet results in approximately 2% improvement in feed conversion. Fat is often added to the diet of early grower (40 to 80lb) and lactation diets because energy intake is often limiting to support maximal performance.

When the piglet survival rate is below 85%, supplementing the sows’ diet with fat during late gestation may improve survival rate. The added fat must provide at least 2.0 to 2.5lb of fat to each sow within the two weeks prior to farrowing. This appears to be a response to fat and not to increased energy intake. The added fat increases the fat content of the colostrum and milk which is responsible for the increased survival rate. Adding fat to lactation diets increases voluntary ME consumption, but only slightly reduces the weight loss in the sows. It increases weaning weights of the litters due to increased fat in the milk. There is no evidence that added fat improves subsequent reproductive performance of sows.

Fiber Content
Some energy sources are relatively high in fiber and reduce gain and efficiency if fed at excessive levels. Pigs weighing 40lb and heavier usually can tolerate up to 5% of a high-fiber ingredient, such as alfalfa, in their diet with minimal effects on performance. As pigs mature, more and more low energy-high fiber ingredients can be fed, especially to sows during gestation and postweaning. High fiber feeds, such as wheat bran and beet pulp, may be useful in gestation and farrowing diets because of their laxative effects, but should constitute no more than 5% of a lactation diet because they increase the volume of feed needed to meet the sow’s energy requirement.

Fiber has a high heat increment, and during cold stress this heat can be utilized to maintain body temperature. Therefore, there is a smaller difference in relative values between fibrous grains (such as barley or oats) and corn in cold weather. Conversely, in hot weather the high heat increment becomes a problem for the pigs’ cooling ability and feeding fibrous feeds should be avoided.

Moisture Content
High-moisture grains contain less energy per unit of weight because of the increased water content. More units of highmoisture grain must be fed to get the same amount of dry matter intake. Studies with highmoisture grains fed in complete diets indicate similar performance to dried grain when efficiency is measured on a dry matter basis. However, free-choice feeding of grain and supplement often results in poorer efficiency. See PIH-07-06-06, “High Moisture Grains for Swine.”

Grinding
With the exception of high-moisture corn, grinding improves feeding efficiency for all grains, especially high-fiber grains such as oats and barley. Finer grinding results in improved efficiency, although finely ground corn (less than 600 microns) may increase the incidence of gastric ulcers in finishing pigs and sows. Generally a grain particle size range between 600 and 800 microns is recommended as optimum. Fine grinding is most advantageous for pigs under 40lb. Wheat is very palatable when it is medium to coarsely ground but high levels of finely ground wheat in diets have been associated with lowered palatability due to dustiness and pastiness of the meal.

Table 1. Relative feeding values of energy sources based on an air-dry basis unless otherwise noted. High moisture feedstuffs must be converted to an air-dry equivalent of 88-90% dry matter to determine energy and substitution rates. Complete data on all ingredients are not available. 2When fed at no more than maximum recommended percentages of complete diets. Relative values based on net energy, lysine and available phosphorus content using simultaneous equations. Example:

Determine values for X, Y, and Z and multiply them times the NE (kcal/lb), % lysine, and % available phosphorus of ingredient in question and sum the values. 3Higher levels may be fed although performance may decrease. 4Some bird resistant sorghums are 80-90% vs. corn.

Table 2. Relative feeding values of protein sources based on an air-dry basis unless otherwise noted. High moisture feedstuffs must be converted to an air-dry equivalent of 88-90% dry matter to determine energy and substitution rates. Complete data on all ingredients are not available. 2When fed at no more than maximum recommended percentages of complete diets. Relative values based on net energy, lysine and available phosphorus content using simultaneous equations. Example:

Determine values for X, Y, and Z and multiply them times the NE (kcal/lb), % lysine, and % available phosphorus of ingredient in question and sum the values. 3Higher levels may be fed although performance may decrease. 4Levels may be higher for gestating sows. 5Diets other than those fed in the nursery would normally contain lower levels.

Figure 1. Partition of energy in nutrition.