The objective of the feeding program for gestating sows is to achieve an appropriate, targeted sow weight gain during gestation that will allow optimum litter development and prepare the sow for lactation.

All phases of the reproductive cycle are interrelated. Therefore, the feeding and management of the gestating sow can influence feed intake and sow performance during subsequent phases of her life. High feeding levels in gestation that result in backfat levels at time of farrowing of 0.83in. or more will reduce feed intake during lactation, especially in early lactation of most genotypes (Weldon et al., 1994; Revell et al., 1998). On the other hand, if sows are underfed during gestation and have low levels of backfat at farrowing, they may have reduced milk production and poor reproductive performance after weaning. Average sow replacement rates in the USA were about 60% in 2003 with a range of 33-86% (Deen, 2003). Reproductive and feet and leg problems continue to be the major causes of culling. The main factors contributing to such high replacement rates are:

Therefore, the aim is to neither under- or over feed the sow at any stage of her life cycle.

During gestation the pregnant sow requires nutrients and energy to maintain her bodily functions, for weight gain and to supply the developing litter (NRC 1998). Maintenance represents 75-85% of the total energy requirement of the pregnant sow (Noblet et al., 1990). Maternal weight gain represents approximately 15-25% of the energy requirement of the sow. The composition of the maternal bodyweight gain will vary with parity, the amount of weight gained and the composition of the diet fed. Therefore, the energy cost per lb of maternal gain can vary from 1.4-2.3 Mcal ME/lb (Noblet et al., 1990).

The developing litter and its supporting tissues (products of conception) will account for about 45lb of the total weight gained during pregnancy (Aherne et al., 1999). But these tissues are very high in water content and therefore only require about 3-5% of the sow’s energy requirement, usually 0.2–0.3 Mcal ME per day. Because the developing litter has a very high priority for nutrients, feeding levels during gestation have to be very low before they will reduce litters size or birth weight of sows that are in normal body condition.

The actual feed allowance to meet these energy requirements will obviously in influenced by:

The maintenance energy requirement of the sow will depend on the weight of the sow. For every 100lb increase in sow body weight her maintenance requirement will need to increase by about 1/3 of a pound of feed per day. Therefore, any feeding system that ignores sow weight will be unsatisfactory. But most farms are not equipped or prepared to spend the time, effort or expense of weighing sows. Therefore, feeding tables must be developed on visual estimates of sow weight or from regression equation developed at Kansas State University using flank to flank measurements obtained by use of a cloth tape (Figure 1; Young et al 2004) The regression equation developed was:

This equation was then used to develop the estimates of sow weight shown in Table 1. 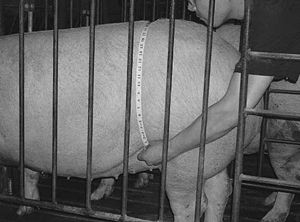 There is no convincing evidence that backfat thickness, by or of itself, has an influence on sow reproductive performance. In many studies and on most farms there are sows that perform well even though they have low levels of backfat. In a recent study at Kansas State University, sows with relatively low levels of backfat (0.49in.) at breeding had reproductive performance as good as sows with high levels of backfat (0.73in.; Young et al., 2004).Therefore, backfat by itself is not a reliable predictor of subsequent sow reproductive performance. It is likely that a thin sow that is gaining weight and putting on backfat will be more productive than a fatter sow that is losing weight or backfat. However, backfat level is a good indicator of the sow’s body reserves. The less backfat she has, the less reserves she has and so the margin for error in underfeeding the sow is very small. If a thin sow has to draw on body reserves during lactation to support milk production and has little backfat, she will mobilize her protein tissues as an energy source to meet her needs. It has been shown that if a sow mobilizes more than 12%of her protein stores during lactation, litter growth rate will be reduced and subsequent reproductive efficiency will be compromised (Clowes et al., 2003). Backfat can be measured electronically. These machines are durable, relatively inexpensive and are easy to use after some training. 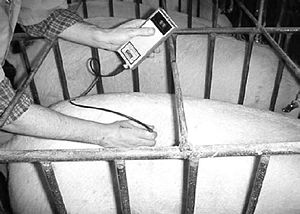 It is important to note that the target backfat levels are not average herd values but are targets to be reached by every sow. A target of 0.7-0.8 in backfat at farrowing allows sows to lose 0.15-0.20in of backfat. It has been shown that sows with backfat levels of less than 0.55in at weaning have lower reproductive performance and are more difficult to get back in condition (Tantasuparuk et al, 2001; Young et al, 2004).

Thin sows (<0.50in. BF) have lower insulation levels, much higher activity levels, spend more time standing and therefore their maintenance requirements are much higher than those of fatter sows, for some by as much as 1.25lb, feed per day (Young et al., 2004). In contrast sows with greater than 0.8in. BF at farrowing tend to have lower lactation feed intake, leading to poorer subsequent reproductive performance.

Using data from published reviews (NRC 1998; Young et al., 2004b). A spreadsheet can be developed to determine the daily feeding levels for each sow based on her weight and backfat level at breeding. These feeding allowances also take into account the sow weight gain needed to attain the targeted increase in backfat required for each sow. The maintenance requirement is then calculated on the predicted midgestation sow weight. Therefore, these feeding levels can be fed from breeding to day 100 of gestation.

For those reluctant to use the cloth tape to take flank to flank measurement, the sows should be assigned to weight classes as shown in Table 1 based on visual appraisal. For farms not using backfat measurement they could replace the four backfat classes with condition scores of 1-2, 2-3, 3-4, >4. Thus this same feeding allowance table could be used with visual estimates of sow weight and condition scores.

Kansas State researchers have shown that adoption of a feeding system based on sow weight and backfat will:

For this feeding program the diet fed should have a nutrient and energy content similar to that shown in Table 2. The suggested nutrient levels are based on NRC (1998) recommendations with an added margin of safety which is influenced by the price of the ingredient and on-farm experience.

A suggested amino acid pattern based on total amino acid levels is presented in Table 3.

It is assumed that the sows are individually fed and that the automatic feeding systems (drop boxes or electronic sow feeder) are accurate. Because gestation lasts for 113-116 days, small differences in daily feed intake can lead to large differences in sow weight gain and backfat levels at farrowing.

Barn temp should be kept at 68-70°F for sows in stalls with concrete slated floors. Below these temperatures a daily increase of 2-3oz. feed per day is required for each 2°F below these temperatures if the cold persists for long periods of the day. This feeding program could also be used for loose housed sows on electronic sow feeding systems. In such group housed sows kept on concrete or straw the lower critical temperature would be 60°F and 50°F, respectively.

Because gestating sows are usually fed once daily, it is not recommended that synthetic lysine be used to meet the lysine requirements.

It is recommended that gilts be fed 4.5–5.0lb/day for the 2-3 days around the time of mating. All other sows can be assigned a regular feeding schedule (Table 1). On the majority of farms there is no advantage of feeding other than a constant daily intake from day 3 to 100 of gestation.

The energy and nutrient requirements of sows increase with advancing pregnancy especially in the last 10 days of gestation. Therefore, it is recommended that sows be fed 2.0lb extra feed from day 100 of gestation until farrowing. This higher level of feeding will prevent loss of sow condition (body stores) and prepare sows for increased feeding levels in lactation without any deleterious effects on the sow.

An essential part of any strategy to optimize sow reproductive performance, increase efficiency of feed usage and lower culling rate, is to control weight and backfat gain during gestation and weight and backfat loss in lactation. This is best achieved by individually feeding each sow a well balanced diet, and basing daily feed allowances according to an estimate of sow bodyweight and backfat thickness.