Originally published as a National Pork Board Factsheet. 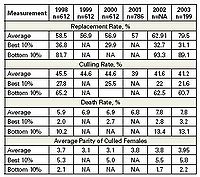 Longevity of the breeding female has both economic and animal welfare implications for the swine industry. High culling levels lead to increased replacement rates and reduce lifetime productivity for individual breeding females and the breeding herd. Greater replacement rates increase production costs related to purchase (or development), isolation, and acclimation of replacement females. PigCHAMP® [1-5] summaries (Table 1) from 1998 through 2003, report annualized replacement rates of > 50% and average herd parity of only 2.5 litters. Breeding herd productivity and economic sustainability are compromised when females are culled early in life and prior to achieving a positive return on investment. Breeding program design and genetic selection decisions clearly influence sow longevity and establish the base for a profitable, sustainable breeding herd.

Genetic influences on female longevity can be viewed directly by measuring and selecting for traits such as feet and leg structure or pigs produced per female per unit of time or indirectly through associations or correlations between production and carcass traits (average daily gain, backfat thickness, loin muscle area, percent lean, etc) with measures of longevity. Both direct and indirect genetic influences have been reported in the literature. Heritability, an estimate of the proportion of phenotypic variation in a trait due to genetics, estimates for stayability have been reported to range from 0.05 [9] to 0.21 [10] indicating that there is a small to moderate genetic influence on longevity. However, because the heritability estimate is low and direct measurement of longevity is difficult, commercial producers will benefit most from sourcing replacement females and males from nucleus herds that practice selection to improve longevity.

Extensive industry genetic selection for increased lean meat yield and enhanced growth rate to meet market demands has likely contributed to reduced longevity in the breeding female. Lopez-Serrano et al. [13] reported that the relationship between stayability from first to second parity with rate of daily gain (correlation range -0.06 to -0.28) and backfat depth (correlation range 0.22 to 0.24) were both unfavorable resulting in poorer stayability in faster growing, leaner females. In addition, research evidence indicates that selection to reduce backfat is associated with poorer feet and leg structure [17]. These relationships among traits identify an industry need to pay particular attention to the amount of selection pressure placed on lean in maternal line production schemes.

Recent reports of genetic line evaluation [18-19] among females commercially available to the U.S swine industry indicate differences in reproductive performance and lifetime productivity exist across genetic lines. These data compiled represent results of the National Pork Board Maternal Line Genetic Evaluation on contemporary groups of females representing six distinct genetic lines raised and reared under similar environmental conditions from early weaning through removal on completion of a fourth parity, death, or failure to conceive within 50 days post weaning. Moeller et al. [19] reported a 10% difference among genetic lines in the percentage of females showing estrus (range 87 to 97%) and a 17% difference between the best and worst performing line(s) (range 77 to 92%) in the percentage of females entering the breeding unit (165 days of age) that subsequently farrowed at least one litter. Johnson [18], in summary of the findings across four parities where 25, 165-day-old cohort groups of females were analyzed, reported that the greater percentage of females expressing estrus and greater percentage of females farrowing at least one litter within the superior genetic line subsequently produced 17 more litters and 174 more pigs per cohort than the next ranked genetic line. These figures correspond to 10.2 more pigs per sow and an average increase of 70 days of herd life through the four parities studied. This study shows the importance of identifying genetic lines that excel in reproduction and the relationship between lifetime production and the ability of females to express estrus, farrow a first litter, and maintain productivity over multiple parities.

A primary opportunity to improve female longevity is through individual selection for structural soundness and movement [16]. Leg and foot structure is clearly inherited from parents, thus the degree of (un)soundness will be reflected in the progeny. Strict selection for correct feet (Figure 1) and leg (Figure 2) structure and movement must occur on an individual pig (sires and dams) basis at the nucleus and multiplication stages to improve structural soundness of parent females entering the commercial herds. In addition, because phenotypic expression of soundness is variable, parent females should be individually evaluated and culled based on structural soundness. 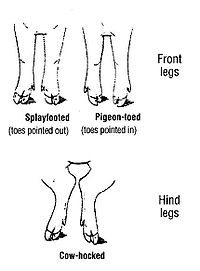 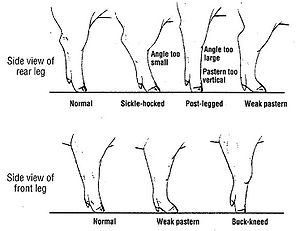 In addition to structural soundness, reproductive soundness can also influence female longevity. Vulva size and shape can be indicators of fertility in females. Small, immature vulvas are often associated with infertility or immature reproductive organs. Upturned vulvas are known to create mating problems in a natural mating system, and may contribute to reproductive soundness even when artificial insemination is used for mating. Underline quality should be evaluated in the context of numbers and size of functional teats. Poorly spaced underlines, pin nipples, and overly large nipples can lead to udder quality issues as parity number increases.

Individual selection and culling will represent a paradigm shift for producers who have previously eliminated only those animals with gross feet and leg problems. For producers who purchase replacement females at a young age, selection of individual animals becomes an economic issue as in many cases the genetic premium has already been paid and the producer feels he must use everything that was delivered. Producers purchasing breeding age females have a tremendous opportunity to perform individual selection for feet and leg soundness as well as reproductive soundness by simply demanding that suppliers only deliver animals meeting pre-determined specifications and rejecting animals that do not meet their criteria.

For internal multiplication systems, the producer has direct control over the genetics and matings used to produce replacement females. This provides the opportunity to manage genetic inputs in greater detail as long as the producer is willing to implement a systematic system of measurement and evaluation. However, in many internal multiplication systems, target numbers of high quality replacement females produced per litter are often unrealistically high (average of 3 or more female replacements per litter). These expectations, while noble, allow little or no selection to take place. A more realistic opportunity to improve both feet and leg structure and reproductive capacity is through selection of the top 50% or fewer of females available as candidates for replacement. For an average litter size weaned of 9 pigs (4.5 females) in maternal production units, this would mean selection on average of 2 to 2.25 pigs per maternal litter produced. To offset the reduced number of replacement females produced within a litter, the number of dams dedicated to producing replacement females will need to be increased. Percentage of the herd dedicated to internal production of females remains a function of herd replacement rate, number of females selected per litter, and the expected farrowing rate of dams dedicated to producing replacement females.

Producers have a myriad of choices when choosing genetic sources and additional options when choosing lines/breeds/crosses within the genetic sources. Results of large scale genetic evaluation of female lines [18-19] indicate that reproductive performance and longevity differences exist across lines and support the need to choose genetic sources with care and to gather as much supporting data as possible to make informed genetic decisions. Genetic line choices should attempt to match production and genetic selection environments to create a physical environment where genetic potential has a greater probability of being achieved. The fundamental principles of making genetic improvement (selection and choice of mates) must be applied for improvement of longevity just like any other reproductive trait. Thus identification and use of animals selected for improved feet and leg structure, reproductive soundness, and maternal ability have a greater chance of reaching a parity level that enhances herd efficiency through a greater return on the investment in the animal.

Female longevity has become a concern for the U.S. swine industry due to increasing replacement rates and in particular a high percentage of failure in young females. The implications of poor longevity are observed in lost efficiency of production with potential implications on the welfare and well-being of the females in production systems. Genetics play a role in longevity through various traits currently measured on the pig. Incorporation of selection programs to improve longevity through selection of component traits, including feet and leg soundness and general fertility, can improve both efficiency and welfare aspects of pig production.