The importance of decreasing costs of production increases as the swine industry becomes more competitive. Costs of production can be decreased through an organized selection program focused on genetic improvement in economic traits. The most competitive producers will use a swine-breeding program, which minimizes cost of production and maximizes return on investment. A clear understanding of genetic principles will aid producers in making selection decisions. This publication provides information about breeding values, heritabilities, and genetic correlations and how to use them in genetic improvement programs.

Breeding values are a measure of an animal’s value as a parent. A breeding value for a particular trait is a measure of the net effect of all genes affecting that trait. Genes occur in pairs and a sample one-half of a selected animal’s genes are transmitted to its offspring. Because a sample one-half of an animal’s genes are transmitted to offspring, on average, onehalf of the breeding value is transmitted. One-half of an animal’s breeding value is referred to as the animal’s progeny difference. Expected merit of progeny from a particular mating is equal to the average of sire and dam breeding values or sum of their progeny differences. Genetic improvement in a seedstock herd is dependent upon a producer’s ability to select breeding stock with an appropriate combination of superior breeding values for all economic traits. For example, a producer choosing a boar to be used as a terminal sire should be concerned with breeding values for traits such as growth rate, backfat thickness, feed efficiency, carcass lean, and meat quality. Whereas selection in maternal lines should emphasize fertility, litter size, and age at puberty in addition to growth and carcass traits. Many genes affect each of these traits. 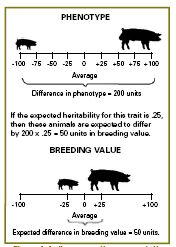 Heritability may be viewed as the proportion of average parental superiority in performance (termed selection differential) that is expected to be realized in progeny performance. This concept is diagrammed in Figure 2. 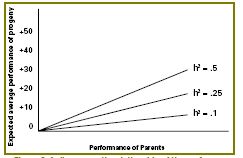 Differences among animals are due to both genetic and non-genetic factors. Heritability of a trait is the ratio of genetic variation to phenotypic variation. Phenotypic variation includes both genetic and non-genetic factors. Heritabilities may differ among traits or herds because of differing control of variation in the production environment. Poor control of the production environment can increase environmental variation and disguise genetic differences among animals. To maximize heritabilities and improve accuracy of breeding value estimates producers should: 1) treat animals equally, 2) take complete and accurate records, and 3) adjust records for non-genetic sources of variation such as number reared in a litter or age at weighing. 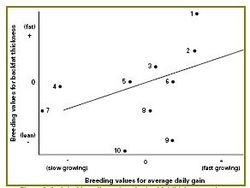 Knowledge of breeding values, genetic correlations, and the relative economic importance of traits of interest is used to calculate selection indexes. Selection indexes are the best method for determining an animal’s relative genetic value. There is a growing trend in the swine industry to select animals to meet a particular market. Indexes exist that specifically target maternal traits, paternal traits or a desired market. Additional indexes may be developed for export verses domestic markets.

Economic weights used to calculate each index will differ; however, genetic parameters are not likely to change. Breeding values and genetic correlations are population measures, which are independent of the economic value of traits. A greater understanding of genetic parameters will help producers understand and utilize genetic information.

Figure 1. A diagrammatic representation of the proportion of phenotypic differences, which are expected to be due to differences in breeding value for a trait with a heritability of 0.25.

Figure 2. A diagrammatic relationship of the performance of parents and the expected performance of their progeny relative to the population mean for traits with differing heritabilities.

Figure 3. A plot of breeding values for backfat thickness and average daily gain with a genetic correlation between traits of .25.