What importance do consumers place on palatability, in general, and tenderness, in particular?

Consumers ideally desire attractive, economically priced products with desirable color, which are nutritious and healthy, tender, juicy, and flavorful, with no fat or additives. At the point of purchase, consumers visually assess meat products for size, shape, color, fat to lean and lean to bone ratio, texture, and cost perserving (McGill, 1981). They then base their purchasing decision on a balance of these factors, determined by past personal experience, which they perceive will provide assurance of maximum eating satisfaction. Unless meat products pass this initial evaluation, further evaluation will not proceed. Once a product has been purchased, consumers respond to aromatic, taste, and mouthful sensations during consumption, which result in hedonic or value judgments, based upon past personal experience.

The priority consumers place upon palatability, in general, and tenderness, in particular, is influenced by economic, social, and environmental factors, but palatability and tenderness are always important considerations. The social and economic climate may markedly influence the importance attached to palatability and tenderness. For example, a restaurant patron consuming an expensive entree has higher expectations regarding tenderness and palatability than the same consumer when consuming a product purchased at a bargain price and prepared in the home. Consumers also have different expectations and priorities for different products and products from different species. Since tenderness has generally not been a concern with pork, lamb and processed products when proper preparation procedures were employed, flavor and juiciness usually were given a higher priority than tenderness. However, with beef steaks and roasts, tenderness usually receives the highest priority.

Although marbling or the intermingling of fat with lean, has been equated with palatability and tenderness for years, increasing concerns regarding animal fat in the diet has caused the perceived health benefit from fat reduction to receive greater importance than assurances of tenderness or palatability. Consequently, consumers now demand minimal visual fat, while still desiring a palatable product, making it difficult to satisfy their requirements. On the other hand, consumers have clearly demonstrated a preference for intramuscular fat when rating pork in blind taste tests (NPPC 1996).

Because of the negative correlation between carcass lean and intramuscular fat, selection for lean composition in the past has resulted in great reductions in marbling. However, the correlation is not very high. This means that selection for both traits should result in an ability to increase marbling while reducing external fat.

Convenience of preparation is of paramount importance to a steadily increasing portion of the consuming public, with more single parent households, more families with two working parents, an aging population, and more single and retired people. Although convenience of preparation takes precedence over tenderness and palatability, to these consumers, all products must provide at least an acceptable degree of eating satisfaction.

Consequently, the bottom line is: tenderness and palatability are very important to consumers, irrespective of economic, social, and environmental influences.

What is the relationship of fat and marbling to tenderness and palatability?

What is marbling and how is it measured?

Marbling is the intermingling of fat with lean in a muscle, and therefore, is intramuscular fat deposited around or between fascial or muscle fiber bundles. Intramuscular fat is usually quantitated chemically, while marbling is usually visually assessed subjectively. For research and carcass grading purposes, it is essential to make assessments under standardized conditions. The surfaces of freshly cut muscles, which have been exposed to air for at least 15 minutes, should be used. Care should be taken to ensure the meat surface is illuminated with at least 100lux of incandescent lighting. Subjective assessment of marbling requires judgment, since several variables can influence the final assessment. Marbling can either be coarse (large deposits), or fine (small deposits) and its distribution can be even, covering the entire muscle, or uneven, covering only portions of the muscle. Overall marbling scores encompass size, number, and distribution of fat particles, with large particles receiving only slightly more credit than small particles and large particles immediately adjacent to the subcutaneous or intermuscular fat receiving no credit. Five levels of marbling are illustrated in Figure 1, and represent the minimum degree of marbling for each level. Muscle surfaces can be compared to these photographic standards. Generally the marbling score is based upon the standard with just slightly less marbling than the sample. In borderline situations, the size and distribution of fat particles is taken into consideration. Large, coarse particles and/or uneven distribution usually result in downgrading to the next lower level.

Traditionally, it has been believed marbling was coincidental with higher degrees of carcass fatness. However, recent research, with both beef and pork have shown only 1-3% of the variation in marbling is accounted for by subcutaneous fat thickness (Jones et al., 1992).Consequently, no amount or duration of high energy feeding prior to slaughter will increase marbling score if an animal has a genetic predisposition for a very low degree of intramuscular fat deposition. Since breeds vary genetically in marbling, selection can be used to enhance marbling. Considerable interest presently exists in estimating marbling in live breeding animals, for this purpose, using realtime ultrasound but these techniques are currently being perfected and are not yet readily available commercially.

Could and should marblingbe enhanced?

Past research has made it obvious marbling can be increased through genetic selection and the use of extended, limited feeding periods. Jeremiah et al. (1992) observed a clear discrimination on the part of consumers to higher degrees of marbling in beef at the point of purchase, but a clear preference for higher degrees of marbling at the point of consumption. NPPC has recognized the same phenomenon in pork (NPPC, 1997). Consequently, it may be possible to educate consumers as to the beneficial effects of marbling on palatability, in which case, it is maybe advantageous to increase mar-bling, depending upon the economics involved. Consumers should be advised, however, even though the chemical fat content of meat cuts increase with visible marbling, the implications on caloric content are relativelyminor. For example, a 100gm cut (cooked weight) with a slight degree of marbling contains approximately 63 calories from fat, while a similar cut with a small degree of marbling contains 69 calories (Jones et al.,1992). 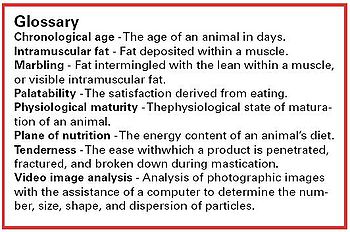