Some of the common questions pork producers ask are, “What do I do with my cull sows?” “Should I move them to market as soon as possible or should I feed them for a few weeks? And if I do feed, how many weeks is best?”

The answer is the same as for most marketing questions—It depends! In this case, there are four factors that should be considered before making a decision about when to market sows: the condition of the sow, expected changes in sow prices, price of feed, and ease of handling.

Condition of the Sow

Probably the most important factor that will determine the advisability of feeding is the condition of the sow when the litter is weaned. Light, thin sows that have weaned heavy litters and have lost a lot of weight during lactation are usually better prospects for feeding than heavy sows.

Another aspect to consider is the overall health of the sow at weaning. Lame or seriously ill sows frequently do not regain weight quickly and may be poor prospects for feeding. There are two primary reasons for feeding cull sows: to allow them time to dry up and thereby avoid any discount on wet sows, and to gain back some of the weight lost during lactation. Both are good reasons. Light sows often will receive a larger discount for being wet than will heavy sows and usually will regain lost weight faster on less feed.

Table 1 presents what may be a typical growth response for a post-weaning sow on full feed. She usually will lose weight for about a week, then gain weight very rapidly for one to two weeks, and then finally gain weight at a slower rate. However, research indicates there is a great deal of variation among sows. Little research has been done on the best diet to feed cull sows. From a logistics perspective, feeding either a standard gestation diet or a finishing diet should be adequate.

Compensatory gain is the term used to describe the recovery growth that usually occurs after an animal has lost weight or has been on restricted feed intake. This growth is frequently very rapid and feed efficient. It is compensatory gain that can make sow feeding profitable. For sows, this rapid growth phase usually begins about one week after weaning and continues until most of the lost weight is regained. When compensatory gain stops, it is probably time to market the sow. The sow may still appear to be doing well, but this is a result of the tremendous amount of feed that she is eating. It is hard to make money with feed conversion rates of 10 to 1.

A second factor to consider is the expected changes in sow prices. The producer may have to take a discount of a dollar per hundredweight or more if sows are marketed wet. Discounts of $2/cwt to $5/cwt are typical. Therefore, sale prices usually can be increased simply by holding cull sows until their udders dry up.

In addition to the discount for wet sows, the producer also must anticipate changes in sow prices. These are difficult to forecast accurately, but usually follow market hog price movements. Sow prices have a seasonal pattern. They tend to peak in late spring and bottom in early winter.

Figure 1 shows the weekly average price for sows for the period 1990-1998 at the six major terminal markets. The markets included are Sioux Falls, Omaha, Sioux City, South St. Joseph, South St. Paul, and Peoria. The most likely period for increasing sow prices is mid-December through mid-May. The period from late May to early December is characterized by declining sow prices. Of course, there is no guarantee the future will be just like the past, but seasonal patterns tend to remain constant.

During periods of rising sow prices, feeding cull sows has three advantages: the discount on wet sows is avoided, compensatory gain is exploited, and the benefits of a rising market are received.

The third factor to consider is feed cost. For all swine operations, feed is the major cost. In choosing to feed cull sows, the swine producer is betting that the value of the gain will be more than the feed and nonfeed costs. 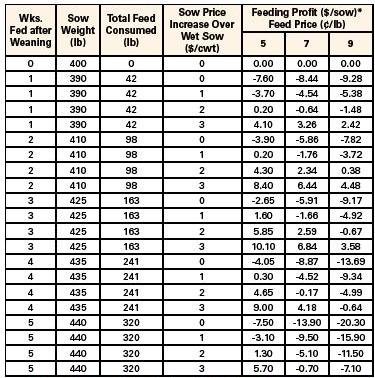 Table 2 contains estimates of the net gain from feeding a 400lb cull sow as compared to selling her immediately after weaning as a wet sow. Feeding periods of one week to five weeks are illustrated along with feed costs of 5¢, 7¢, and 9¢ per lb. In Table 2, the price received for fed sows is either equal to the base price for wet sows or $1, $2, or $3 above the initial price of wet sows. The cost of labor, interest, facilities, and other nonfeed expenses is set at $1.50 per sow per week.

As would be expected, feed cost and changes in sow prices are the keys to net return. Returns vary greatly, case-by-case, but tend to be maximized after about three weeks of feeding.

Table 4 uses the terminal market weekly average sow prices for 1990-98 in combination with sow feeding performance described in Table 1 to present the most profitable sow feeding periods for different weeks of the year and different feed prices.

The fourth item to consider is the ease with which sow feeding fits the swine operation. In order to feed cull sows profitably, adequate facilities and labor must be available. During the summer, sows may require supplemental cooling in order to achieve satisfactory rates of gain. Proper shelter is important during cold or wet weather as well.

A very real prospect to keep in mind is the possibility of declining sow prices during the feeding period. If sow prices do drop sharply, no amount of compensatory gain will offset the loss. If you cannot handle the risk, selling wet sows may be the best option.

Pork producers have a choice every time they cull a sow: to feed or not to feed. There are conditions under which it appears that selling sows shortly after weaning is the best choice-if the sow is lame, if facilities are not available, have heavy sows that lost little weight during lactation, have high feed costs, or expect a decline in sow prices. However, in general, it appears that a two-week to four-week feeding program can be profitable, especially during months in which seasonal increases in prices are expected. Beyond four weeks, the sow probably will experience little additional compensatory gain and consequently feed conversion should drop sharply. Any added profit will have to come on the strength of rising sow prices. 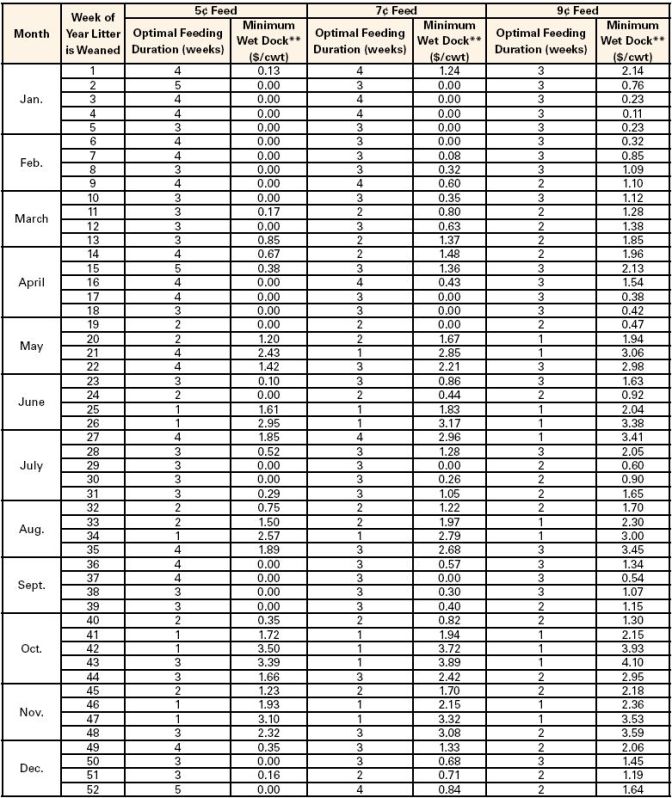 Table 3. Increase in price above wet sow price needed to break even when feeding a 400 lb cull sow. *Assumes nonfeed cost of $1.50/week and a wet sow price of $40/
cwt of live weight.

Table 4. Optimal sow feeding duration for 400lb cull sows, 1990-98. Assumes nonfeed cost of $1.50/week. **If the dock for wet sows is less than given amount, then selling wet sows is advised.