Transmission of M. hyopneumoniae occurs both via carrier dams to their pigs during lactation and via infected pigs to susceptible pigs during growth. Depending on the production system, pigs usually do not develop clinical pneumonia until they leave the nursery and are housed in the growing-finishing area with older pigs. If the sow herd is heavily infected with M. hyopneumoniae, suckling pigs can develop clinical pneumonia at an earlier age. Infection and pneumonia at early ages is frequently associated with continuous-flow operations, when PRRSV is circulating in the nursery and when younger pigs are commingled with older pigs.

Transmission of M. hyopneumoniae can occur via aerosol spread. Possible aerosol transmission between farms has been reported and needs to be considered for biosecurity purposes. While long range aerosol transmission may be possible, most aerosol spread occurs across short, direct distances or direct nose-tonose contact between animals. The primary spread of M. hyopneumoniae occurs as infected pigs cough the organism out of the respiratory tract and into the environment where it is inhaled by or otherwise contaminates susceptible animals.

Nearly all (greater than 95%) commercial swine herds are infected with M. hyopneumoniae. In a herd of pigs without obvious clinical signs of infection (cough) from M. hyopneumoniae infection, typical lesions may be observed in the lungs at slaughter. M. hyopneumoniae has been isolated from clinically normal lungs and is probably never completely cleared from the airways of infected pigs. Thus, pigs without clinical disease can carry the organisms and transmit them to susceptible animals.

Typically, mycoplasmal pneumonia is seen in pigs in the growing-finishing phase of production. Pigs exhibit a dry, nonproductive cough that may persist for 1 to 2 months. As the disease spreads from pig to pig in a group, the group may appear to have the disease until slaughter. Pigs infected with only M. hyopneumoniae have normal feed intakes and average daily gains. However, concurrent infection with secondary pathogens results in decreased feed intake, and consequently the pigs fail to grow at a normal rate. Variation in the number and identity of the secondary organisms, dose of M. hyopneumoniae organisms, and the extent of the pneumonia results in a variable depression of the growth rate in a group of infected pigs.

Clinical signs and lesions of mycoplasmal pneumonia are occasionally observed in nursery pigs in the presence of PRRSV and other secondary organisms. Pigs will exhibit fever, lethargy, respiratory distress, and decreased feed consumption. The percentage of pneumonia in these pigs can be extremely high with greater than 80% of the lungs of an individual pig showing lesions of pneumonia.

Although the specific economic effect of mycoplasmal pneumonia can be difficult to ascertain, a review of a number of studies of herds with enzootic pneumonia found a 17% decrease in daily weight gain and a 14% decrease in feed efficiency. In addition, it has been estimated that for every 10% of the lung with pneumonia, the mean daily gain is reduced by 37 grams. One study estimated that the cost per pig for mycoplasmal pneumonia was $4.08, and the annual cost for the entire U.S. swine industry was about $367 million. This cost excluded the costs of drugs used to treat or reduce the effects of this disease (which has been estimated to be around $100 million) and the disease-enhancing effects of poor management.

Diagnosis of mycoplasmal pneumonia remains difficult. Currently, the best results are achieved by clinical observation, postmortem and histological examinations, and fluorescent antibody examination. Polymerase chain reaction (PCR) assays are increasing in popularity. Expense, environmental contamination, and proper sample collection and handling all must be considered when using PCR for diagnostic purposes. Isolation of M. hyopneumoniae organisms is slow, difficult, and not routinely available. In addition, the laboratory isolating the organism must be able to differentiate M. hyopneumoniae from other common non-disease inducing species of mycoplasmas. Enzyme linked immuno-sorbent assay (ELISA) is the primary test used for measuring antibodies in serum. Several types of ELISA assays are available, so interpretation is test specific. ELISA results can aid in supporting a diagnosis of M. hyopneumoniae infection in a herd. However, depending on the ELISA test used, antibodies can be detected in the serum within 2 to 6 weeks of exposure of infected animals, making use of serology a poor measure of timing of infection.

Antibiotics. Antibiotics are frequently used to treat pneumonia in pigs. Many antibiotics appear to be effective against M. hyopneumoniae in the laboratory. However, their success in the pig is often poor. A recent study found that chlortetracycline administered prior to infection was effective in decreasing both the formation of pneumonia and the number of organisms. Administration of the drug following infection resulted in no reduction in pneumonia; however, the number of organisms was significantly decreased. Studies have looked at tiamulin, either before or after M. hyopneumoniae challenge, and found minimal effect on the clinical signs or lesions of mycoplasmal pneumonia. Lincomycin administered by injection or at high doses in the feed has been useful in reducing the number of organisms in the lungs. When lincomycin was adminstered with and without M. hyopneumoniae vaccines, it successfully reduced or prevented pneumonia. Many of the antibiotics on the market enhance growth performance and aid in the control of secondary infections, but have minimal to no effect on the mycoplasmal pneumonia.

Vaccines. A number of commercial vaccines are available that are effective in the control of mycoplasmal pneumonia experimentally and in the field. However, vaccine failure under production settings has been reported. Recent research has shown that the presence of PRRSV during or immediately following M. hyopneumoniae vaccination can result in decreased efficacy of the vaccine. Each production system should determine whether there is a need to use vaccines and the appropriate time to administer them to ensure optimal, economically sound disease control. Vaccination against mycoplasmal pneumonia is often considered an important tool in the control of PRDC in many herds. Vaccination is generally considered better than antibiotic therapy for the long-term control of mycoplasmal pneumonia.

Management. Whenever possible, the farm should incorporate sound management procedures into the production system. Special attention should be given to the factors listed in Table 1 especially the major influences designated with 3 (+) signs.

Primary Specific Pathogen Free (SPF), Medicated Early Weaning (MEW), Modified Medicated Early Weaning (MMEW), segregated early weaning (SEW), 2- and 3-site Multiplication (Isowean) and All-In, All-Out (AIAO) programs were developed to prevent the transmission of diseases from the sow to pigs and from older pigs to younger pigs. Each of these programs requires the use of a high degree of biosecurity. These programs used alone or in combination have been shown to allow pigs to attain a growth rate near their genetic potential if all other inputs are correctly managed. These programs either prevent or control enzootic pneumonia, in addition to many other diseases in pigs.

Seedstock suppliers heavily utilize these disease control programs, however, because reinfection of herds free of mycoplasmal pneumonia is common, these programs (except AIAO) are less frequently implemented in commercial herds. 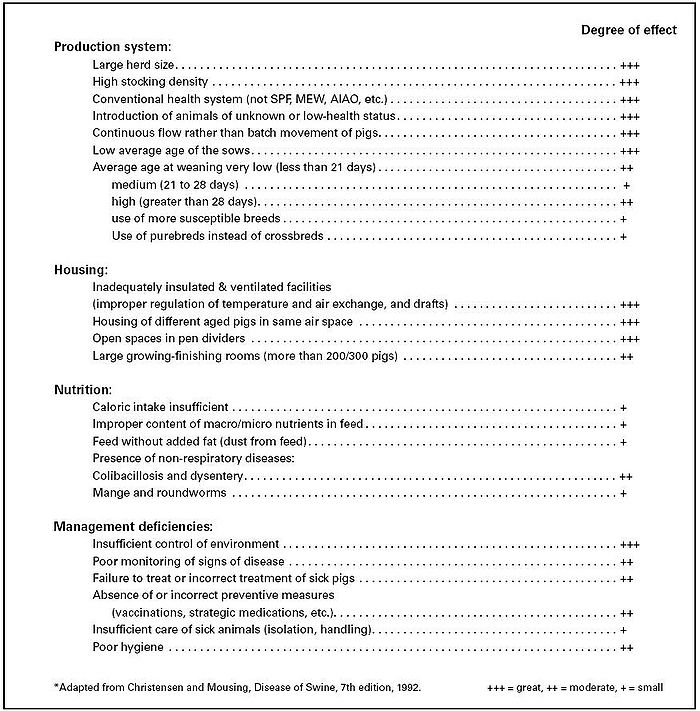