The issue of the safety of the food supply has been deliberately debated during the past few years. Continual media coverage has kept this issue at the forefront of most consumers’ minds. The meat industry, in particular, has been focused on as one area where improvement can and should be made. In an effort by the industry and regulatory agencies to further enhance the safety of the meat supply, the meat inspection reform began to take place.

The 1996 Pathogen Reduction-Hazard Analysis Critical Control Point Final Rule, commonly referred to as the Mega-Reg, dictated that HACCP programs be developed and implemented by the various segments of the meat and poultry industry by January 2000 depending on plant size. Approximately 350 large operations (those with greater than 500 employees) implemented HACCP programs in 1998. However, the United States Department of Agriculture determined that over 95% of the federally inspected meat and poultry operations would be classified as small or very small and thus begin HACCP implementation either in 1999 or 2000.

Many of these operations, especially those classified as very small (less than 10 employees or sales of less than $2.5 million) lack the appropriate personnel to conduct HACCP under traditional means. Therefore novel approaches will be required to meet certain regulatory requirements. Recent clarifications of the Final Rule by USDA has given processors the flexibility to pursue non-traditional avenues of meeting regulatory requirements.

One such regulation is that of pre-shipment record review. Due to the complexity of many operations, USDA has given processor flexibility in achieving this requirement. According to the Final Rule 9 CFR Part 417.5 Paragraph (c) “Prior to shipping product, the establishment shall review the records associated with the production of that product, documented in accordance with this section, to ensure completeness, including the determination that all critical limits were met, and, if appropriate, corrective actions were taken, including the proper disposition of product. Where practicable, this review shall be conducted, dated, and signed by an individual who did not produce the record(s), preferably by someone trained in the application of HACCP or the responsible establishment official”.

In essence, this states that the establishment should do a double check of the records before the product is shipped to ensure that all proper procedures were followed in accordance with the establishment’s HACCP plan. This includes a review of records to ensure Critical Control Point Critical Limits have been met, Monitoring has been conducted, and if necessary, Corrective Actions were taken. Although it was first intended for this review to occur at the point of shipping, in many operations it may best be accomplished at other stages of the implementation of the HACCP Program.

Also, another important issue is that although it is recommended that someone other than the individual who produced the record review such records, this may not always be possible. Therefore, the same people could review their own records, although this should be done only when absolutely necessary. The flexibility allowed by USDA to adapt a program which best fits individual operations while continuing to meet regulatory compliance in an effort to produce the safest meat product possible greatly enhances the efficiency of implementing HACCP programs.

As stated earlier, the original concept of pre-shipment record review was to review records associated with that specific product on the shipping dock immediately prior to product being shipped. However, more efficient methods may exist for the various operations in your plant.

One such method is an “End of the Day Review” of all appropriate records associated with the production of that product (as shown above). This method allows “the Responsible Establishment Official” to evaluate the completeness of the records associated with products produced that day which have not been shipped. For operations that process products that are not immediately shipped, this method allows ample time to review records. However, for those operations which have product continually being shipped throughout the day, this method will not allow for maximum operational efficiency.

The continuous review method (shown above) allows for continuous record review at each Critical Control Point during the production of the product. As an employee monitors the process and records the data, a supervisory individual would conduct the verification procedure related to those records and at the same time also sign off that the records are thorough and complete as the pre-shipment review. This would require that the monitoring sheet at each Critical Control Point allows for the recording of the monitoring information, the time and initials of the monitoring personnel, the initials of the verifying personnel and a final column for the Pre-Shipment Review personnel (again, this could be the verification personnel) to sign off on the completeness of the records. It is important to remember that the Pre-Shipment Record Review does not have to be conducted at the same frequency as either the monitoring or the verification. This frequency however should be predetermined and be appropriate for the task. This method allows for all records related to each Critical Control Point to be located on one document. The figure above is an example of a Continuous Pre-Shipment Review form.

Product codes must be clearly related to production times in order to assure that products which are in need of being recalled due to health risks may be promptly removed from commerce. This eliminates the necessity of having to recall the total inventory of products produced by the establishment.

The two methods outlined are just two of many methods which may be acceptable for conducting the required Pre-Shipment Record Reviews. The flexibility allowed by USDA in meeting this requirement of HACCP implementation gives meat and poultry operations the ability to be creative in designing a program which will best fit their method of operation. 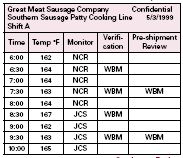 Table A: End of Day Review