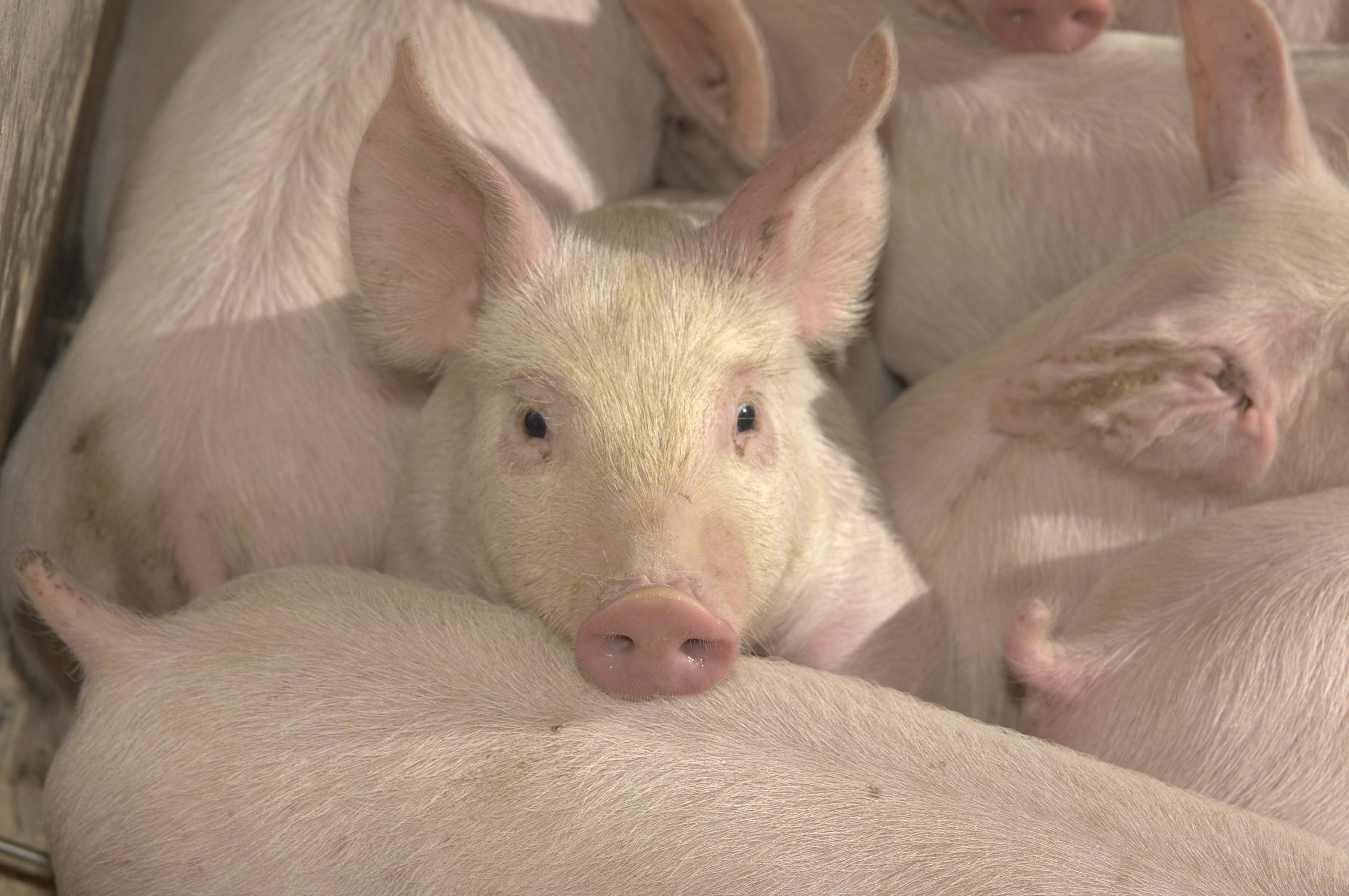 Originally published as a National Pork Board Factsheet.

Swine influenza virus (SIV) infections in swine are common causes of respiratory disease in pigs. Infection of pigs occurs throughout the world. Prior to 1998, swine influenza in pigs in the United States was caused by H1N1 SIV. In August of 1998, a North Carolina herd exhibiting clinical signs of influenza was identified with H3N2 SIV. Since that time, isolates from pigs in Texas, Iowa, Minnesota, and Illinois have been typed as H3N2 SIV.

Swine influenza virus is an orthomyxovirus with a segmented RNA genome. Orthomyxoviruses are divided into three groups as type A, type B, or type C. Only type A viruses infect pigs. The type A viruses are further subtyped based on their hemagglutinin (H) and neuraminidase (N). There are 15 hemagglutinins (H1-H15) and 9 neuramindases (N1-N9) that have been identified in humans, animals, and birds. Due to the segmented genome, genetic reassortment can occur between different subtypes, resulting in antigenic shift when H and N genetic material are exchanged between viruses. In addition, antigenic drift can occur due to accumulation of point mutations in genetic material, which is common in RNA viruses.

Viral replication is generally restricted to the respiratory tract of the pig. The primary area of infection is the respiratory epithelium lining the airways. Immunity to infection develops very rapidly and is detectable by the hemagglutination-inhibition test around 6-7 days post-infection, which provides a very narrow window of time for diagnosis by nasal swab specimens. Only pigs with acute disease should be swabbed for virus detection. Typically, those pigs are febrile with high temperatures of 105°F or higher, and are off feed (sows or boars) or are reluctant to move at all (nursery pigs).

Epidemiology: Two forms of disease occur in swine, endemic or epidemic (epizootic). Sow herds with endemic H1N1 or H3N2 influenza will ordinarily have sporadic abortions (due to the high fever associated with acute infection) and may also be manifested as a decreased conception rate due to first and second trimester abortions that are recorded as “not in pig” events. Aborting sows will usually be off feed for 2 to 3 days with a fever of 105°F. Epidemic influenza is readily apparent in all age groups. Onset of disease is acute and dramatic, particularly in the sow herd. For naive sow herds, abortion may be widespread, ranging from 5 to 10% of the sow herd. Unlike PRRS-induced abortion, influenza-induced abortion storms resolve within 2 to 3 weeks. Spread is rapid, typically sweeping a breeding/gestation facility within a week. Similarly, the respiratory disease associated with epidemic influenza in growing pigs is of rapid onset, and the initial viral pneumonia-induced coughing within the herd is of short duration due to rapid spread among susceptible pigs. Transmission is by direct contact and highly infectious viral aerosols within facilities. Under appropriate environmental conditions, airborne spread may result in explosive spread among farms within very dense swine production areas. Unless appropriate management decisions and interventions are made, herds with acute or epidemic disease very commonly have endemic disease thereafter.

Epidemic disease is seasonal in nature, and peaks in periods of greatest environmental stress, such as the late fall and winter months of the Midwest, or late summer in the Southeast. Disease onset often occurs during extreme temperature fluctuations. Commonly, it is associated with chilling that can occur in the Midwest due to dramatic drops in outdoor temperature or loss of heating, and in the Southeast due to malfunctioning drip cooling systems that remain on into the evening in combination with the increased ventilation rates of summer.

The incidence of H3N2 influenza in the US swine herd is unknown at this time. The relatively simultaneous detection of infected herds in the Southeast and Midwest in late 1998 infers that H3N2 was introduced into the US swine herd at least 6 months prior to the initial detection reported from North Carolina. Isolation of H3N2 influenza virus from herds vaccinated against H1N1 influenza has been a common occurrence in the Midwest (Illinois, Iowa and Minnesota) and the Southeast (North Carolina). It is likely that the prevalence of H3N2 and H1N1 in infected US swine herds is now similar to Europe, with a slightly higher prevalence of H1N1 than H3N2, 60% vs. 40%. A national, industry wide serologic survey will be needed to determine the actual prevalence.

Risk of transmission of this new type of influenza virus (in the US) to people is probably minimal for the strains of H3N2 virus circulating in US swine at this time. The initial isolate from North Carolina was neutralized with hyperimmune sheep antiserum against a Chinese 1995 human H3N2 isolate. It is very likely that most people already have immunity against later (1996, 1997 or 1998) human strains of H3N2, which in turn provides solid protection against the H3N2 influenza currently circulating in US swine.

Pigs infected with H1N1 SIV usually can not be differentiated from pigs infected with H3N2 SIV based on clinical signs as they are similar with both infections. Field reports suggest that H3N2 SIV infections are more severe than H1N1 SIV infections. This is probably due to the fact that many pigs are vaccinated with H1N1 SIV vaccines or already have antibodies due to natural infection with H1N1 SIV and, therefore, should be protected from severe clinical signs due to H1N1 SIV infection. Pigs infected with SIV show a variety of clinical signs including coughing, nasal and/or ocular discharge, sneezing, depression, anorexia, dyspnea, and hyperthermia. It is not uncommon for pigs to develop temperatures of >105°F. Reproductive performance in both males and females can be affected by SIV infections. Elevated rectal temperatures in boars can result in adverse effects on the testicles and sperm, resulting in reduced fertility. Depending on the stage of gestation, affected females can show a variety of reproductive problems including delayed return to estrus, abortions, and reduced viability of piglets at birth. Milk production in lactating females may be reduced, resulting in adverse effects on the nursing piglets.

Swine influenza virus infections can be diagnosed based on a combination of clinical signs, typical gross and histopathologic lesions, diagnostic tests to detect live virus, nucleic acid, or antigen and serologic assays. Type A influenza viruses share a common matrix protein and nucleoprotein. Consequently, there can be some cross reactivity with H1N1 and H3N2 SIV in some tests, such as ELISA or indirect immunofluorescence assay (IFA), due to the common proteins. Tissues, particularly lung, can be evaluated for the presence of live or inactivated virus using immunohistochemistry, fluorescent antibody techniques, and commercially available antigen capture ELISAs which detect type A influenza viruses. The presence of SIV or viral antigen can also be evaluated from nasal or lung airway swabs on the antigen capture ELISAs.
The presence of SIV nucleic acid in diagnostic specimens can be evaluated by polymerase chain reaction (PCR). Virus can be isolated from tissues or swabs in cell cultures or embryonating chicken eggs. Virus isolates can be typed to determine the H and N components, which is important for determining the type(s) of SIV vaccine to use in a herd.

Swine influenza virus has the ability to cause red blood cells to agglutinate. When type-specific antibodies are present, hemagglutination is inhibited. This phenomenon is taken advantage of through the use of a hemagglutination-inhibition (HI) serology test for detection of SIV antibodies. Since this phenomenon is based on the H component of the virus, a single HI test can not be used to detect both H1 and H3 antibodies as different viruses have to be used in the test. Additional assays for detecting H1N1 or H3N2 SIV antibodies include the ELISA, immunodiffusion, and IFA.

Treatment for SIV infections is based on supportive therapy and can include reducing stress, medication to lower body temperatures, and ensuring the pig is made as comfortable as possible. Prevention is based on good management practices to reduce the risk of SIV entering the herd and include good biosecurity measures such as limiting people and vehicle traffic on the premise, properly cleaning and disinfecting trucks that take pigs to market, and quarantining new pigs before placing them in the general pig population of the farm. Due to the antigenic differences between H1N1 SIV and H3N2 SIV, vaccines containing H1N1 SIV are not expected to be protective with H3N2 SIV infections. Therefore, an H3N2 vaccine will need to be used. Options for vaccination include autogenous or commercially available vaccines.